The Octopus- A Fijian Legend

Posted on March 16, 2017 by islandculturearchivalsupport

Our next legend comes from Fiji and was taken from the book Folktales of the South Pacific. Animal stories were very popular throughout the Pacific Islands. They were often stories about animal ancestors of the people and their extraordinary deeds. Sometimes they were stories about good and evil. Some of these stories were short and funny, while others were long and exciting. Although not very long, “The Octopus” is an exciting and intense story about two tough gods of the reef. Enjoy!

In all the channels through the coral reefs of Fiji in the olden times, gods used to guard the land. Dakuwaqa, the great shark, was one such very powerful god. His power over the minds of the people in Fiji was very great for they respected and feared him.

“Have you challenged the gods of the reef-passages of the island of Kadavu?” asked Maselaca.

Dakuwaqa swam southward to Kadavu to the Naiquro passage in the reef; the watchman was absent. He went to the Vesi passage, and the guard of Vesi, Tui Vesi, a man, was on land, where he lived. Dakuwaqa and he greeted each other.

“The guard at Naceva passage on the south coast of Kadavu is an octopus,” said Tui Vesi. “You’ll find him hard to conquer. His name is Rokobakaniceva. Before you come to that channel or passage you will see an imprint of that octopus on a rock at a point opposite the channel.”

Dakuwaqa went on down the coast and before he entered the channel, he gave warning, “Make way at the passage!”

The octopus replied, “No, I am the barrier past which no one may go without my permission.” 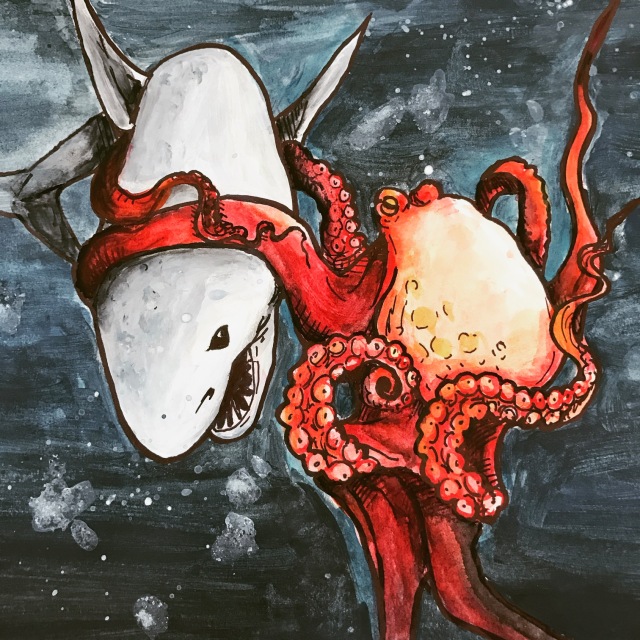 The octopus let four of its great arms grasp the biggest rock at the bottom of the sea, and he stretched the other four to the surface. At that very moment Dakuwaqa was shooting his way through the passage, and immediately the octopus grasped Dakuwaqa with his four upper arms. Then he loosened his four lower arms from the rock, and all the great tentacles encircled the body of Dakuwaqa, the Shark-god. From the tip of his tail to his head he was embraced by the octopus, with only his mouth free of the enemy’s arms. Dakuwaqa’s big ugly mouth peeped out from the embrace of the octopus. “Never will you see your friends again,” said the octopus. “This is the day of your doom.”

“Free me, and we two shall make a pact,” Dakuwaqa replied. “It is well known that I, the shark, am the terror of all shipwrecked people. Free me from your tentacles, and I vow that your people of this district of Naceva in Kadavu need never fear me.”

And so it came to pass. To this day it is said that Naceva people are never attacked by sharks when they are shipwrecked. The great shark-god, ruler of all sharks, protects them, and a bond of friendship still exists between the people of Naceva, Rokobakaniceva’s people and Taviuri, the land of Dakuwaqa, the famous.

And the imprint of the octopus is still there on the rock for all to see.