Our next Pacific legend comes from American Samoa. There are two large mountain peaks on Tutuila Island of American Samoa, the tall stately Matafao, and the imposing Mt. Pioa, also known as “Rainmaker.” They preside over the island and face each other across Pago Pago harbor.

This is the story of how they came to be. The English version by Bryon Birdsall, Samoan version by Mua S. Lutu. A printed version of this story was made by Transpac Corporation, Pago Pago, American Samoa. Enjoy!

Once there was a very old man. He had two sons named Pioa and Matafao. They quarreled night and day.

And the old man died.

For a long time Pioa and Matafao grieved over their father’s death. The brothers were so sad that they forgot to eat. At last they decided to have a big feast.

Full of food, Matafao stood on a cliff to view his land. A bird flew over and dropped a rock on his head. Matafao was angry. He thought Pioa had thrown the rock. So he threw a rock at Pioa. 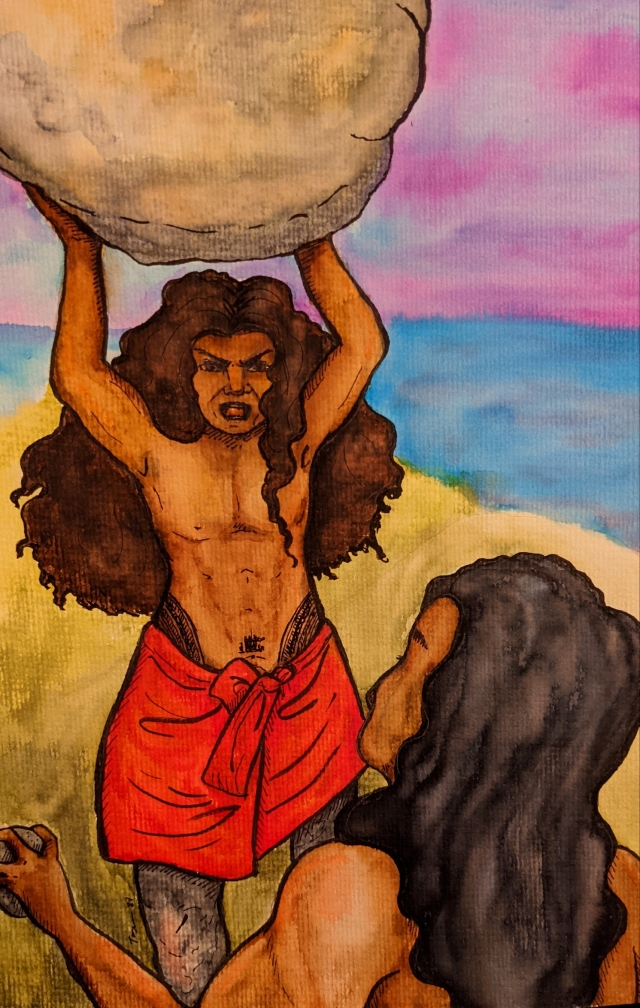 Pioa and Matafao began to fight again, and their legs turned to stone, just as their father said. Matafao knew the fighting was wrong and apologized. But Pioa only threw more rocks at Matafao.

Matafao warned Pioa to stop, but he would not listen. Finally, Matafao hurled an enormous rock at Pioa and knocked off the top of his head. One huge piece plunged into the sea and still lies there as a small island rock.

Thus, ends the story of Tutuila’s mountains, the tall Matafao, and Pioa, the Rainmaker over which a cloud broods every day where the top of his head used to be, and the island rock in the ocean that was once Pioa’s head.