Indira Stewart, writer for Radio New Zealand, covered an interesting and inspiring event that recently took place in Tonga that I would like to share: Tonga will open its first public library next month in the village of Kolovai, with thousands of books donated by Auckland Council libraries.

Thousands of books have been donated by more than 50 Auckland Council libraries among the hundreds of other items given by generous New Zealanders including bikes, laptops and more.

It’s the brainchild of South Auckland couple Kahoa and Brendan Corbett, who for the past year have been packing up donated goods almost every month to be shipped to Kolovai. “That’s the non-fiction, fiction, there’s biographies there,” Mrs Corbett said, pointing to a stack of boxes at the Onehunga-based CFR Line shipping company inside which hundreds of books have been categorized and are about to be shipped to Tonga.

It’s a dream come true for the couple, who visited Kolovai eighteen months ago after it had suffered some of the worst impacts of Cyclone Gita. “I looked at the schools. It was just nothing left … I said ‘Well, we have to do something about this’ because there were no books.”

The couple helped in the clean up and restoration of the cyclone-ravaged village and over time, Mrs Corbett noticed an abandoned community fale, which sparked an idea. “The fence was totally ripped, the pigs were everywhere. So I just went straight to the town officer and I asked him ‘Hey, what are you doing with that house? Would I be able to start up a library in there?’.”

Now that idea is about to become a reality.

While it may be a surprise for some that Tonga has never had a proper public library before, the little South Pacific kingdom is full of avid readers and has a 99 percent literacy rate.

Tongatapu, Tonga. Kolovai Village is on the western part of the island

There have been other community venues open to the public with resources and various donated books but the Kolovai library is said to be the first to operate with a catalogued library system, allowing books to be issued and loaned out to members of the public – a system set up with the help of Auckland libraries in New Zealand.

The Corbetts explained that apart from what the kids learned in school, much of the island was limited to reading only the bible, with very little access to any other literature. “The first thing I did was I called and I wanted to speak to the manager of the Auckland libraries because I said that I needed some books. I said I really want to start up a library. All of a sudden the emails, the phone calls arrived and it was just amazing. ‘Kahoa we’ve got books here, Kahoa we’ve got books there’. It came from everywhere.”

Fifty-two council libraries around Auckland have donated thousands of books since that call – but that’s not all that came through. SkyTV donated 30 laptops, New Zealand bike company ONZO donated dozens of bikes, Bunnings Warehouse gave paint for the renovations and even Mr Corbett’s students pitched in to help.

“The books were pouring in but we had no shelves. So I was the Tech teacher at Southern Cross just up the road here and we needed a project for these kids so I said “Well, we’ll fund it. We’ll buy all the materials and we’ll get the kids to build all these shelves’,” he said. “We built shelf after shelf after shelf and packed them all down and then loaded them into a container that was going up.”

To top off all the free donations, CFR Line Shipping company offered to send everything to Tonga at no cost. When the containers arrived at the port in Nuku’alofa, Tonga’s capital, all the locals pitched in to help. “We had the kids trained up with a laptop and a scanner trying to load everything in. They were loving it,” Mr Corbett said.

The couple have been back to the kingdom multiple times to help set up the library and they said every time they arrived, village locals always turned up to help. “They all came, they all helped. They were like hammering away and the kids from the village helped. Brendan instructed them, he got the paintbrushes,” Mrs Corbett said.

She added, “They were like a bunch of contractors, they were so fantastic. Screwing all these shelves together and then they wanted to paint them. The shelves all got built and painted and they’re all perfect. It was hilarious. Once we opened up all the boxes and started shelving the kids were gasping and pointing ‘Dinosaurs! dinosaurs! dinosaurs!” 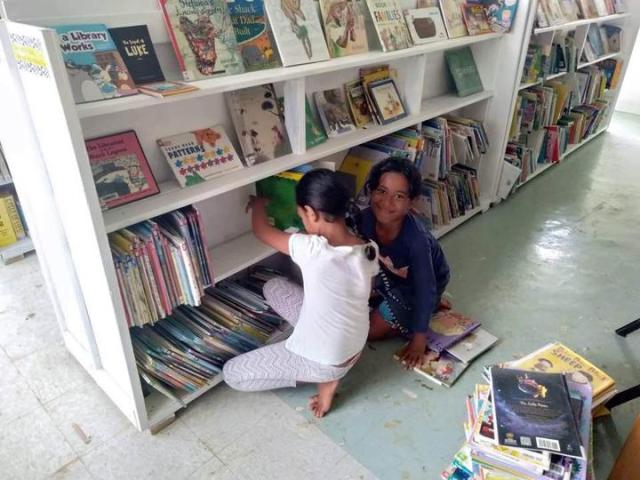 Placing books on the shelves, photo by http://www.rnz.co.nz

The couple said some village adults were suspicious about the library at first because they didn’t understand what it was and didn’t see any point in it. But over time, even they began taking an interest in the books too. “There’s a women’s group – a mother’s group and they turn up with their little kids and you know, it’s a bit scary – the kids just wander around and the mothers get all absorbed in these books. So they’re pulling out books here and there.”

As the library prepares for its official opening on October 11th, Mrs Corbett has been putting up framed pictures on the walls inside the library – they’re photos of successful Tongans around the world including many who have graduated with doctorates.

Mrs Corbett said she hoped the library inspired the village locals, and especially the kids, to dream big. “I feel really happy to see the reaction from the community, understanding why it’s important to have books. It’s opened them up to another world,” she said. “It’s been a tough road and it’s been hard work but now we’re nearly there and I’m happy that we’ve done something for the community.”