The Turtle and the Island- Papua New Guinea

Our next legend comes from Papua New Guinea and can be found in the book, The Turtle and the Island. I absolutely love this legend because it tells the story on how the island of New Guinea was made by a turtle who got tired of swimming through the big ocean without ever resting. It’s a wonderful story that I hope you enjoy!

The Turtle and the Island

Long, long ago, in the days when turtles had teeth, there lived a great sea-turtle, the mother of all sea-turtles, who spent her time swimming about the wide sea that now men call the Pacific Ocean. Slowly she swam, feeding on the fishes that lived in the sea and the plants that grew there, and snapping up the shellfishes that lurked in the rocks where the sea bordered the land. She swam from one side of the sea to the other, to and fro between the lands that bordered that vast ocean.

She lived in the sea, but she swam both above and below the surface of the water; above the surface she breathed the clear, fresh air and felt the warmth of the sun. She looked up to the sky and saw the sun by day and the moon by night, and the birds that flew across the ocean from land to land. She looked down into the sea and saw its dark, cold depths.

Sometimes the turtle grew tired of swimming, and rested just below the surface of the sea, but she often longed to rest in the warmth and sunshine. She thought how pleasant it would be if only there were a piece of land in the middle of the great ocean where she lived.

In a dark, secret cave far below the sea where the turtle swam there lived a man. His skin was black, and in all that great ocean he was the only man. He had no wife, no children, no tribespeople. The man was lonely in that cave beneath the sea. His heart was heavy as a stone on the seashore. He was weary of being alone.

One day, as the turtle swam about, she came to a place in the middle of the ocean where a great hill of sand was raised up from the bottom of the sea. The hill was so high that the top of it almost reached above the surface of the ocean.

“If I were to bring more sand to add to this big hill, soon it would rise clear above the water,” thought the turtle. “The sun would shine down upon it by day, and it would be a place where I could rest and enjoy the warmth and the clear air when I grow tired of swimming.”

So the turtle went to another part of the ocean floor, where she dug up rocks and more sand, and these she brought back to the hill, so that it grew higher and higher. She did this more times than anyone could count. The sun rose and set, the moon waxed and waned day after day, and still the hill grew higher. And at last it became a huge island in the middle of the sea, and the turtle saw that her work was finished.

Then the birds that flew across the ocean from land to land brought seeds of plants and trees and dropped them on the island. Grasses and flowering plants and tall trees sprang up, covering the rocks and sand. It was a beautiful, fertile island, surrounded by the sea which teemed with fishes large and small.

One day, she swam down, down into the ocean, much deeper and farther than she had ever swum before. How dark and cold it was down there, far from the light and warmth of the sun! Suddenly the turtle swam into the dark, secret cave where the man with the black skin had lived alone for such a long time. The man was overjoyed when the turtle came to him; he begged her to find him a wife who would be his companion and bear children. 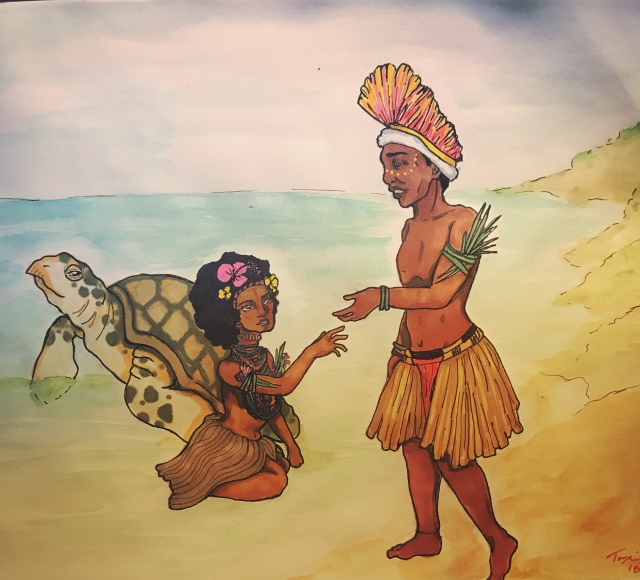 “The Turtle and the Island,” illustration courtesy of Tara Bonvillain, copyright 2018.

The turtle felt pity for the man’s loneliness. She took him, riding on her strong shell, to the island she had made. Then she swam across the sea to the nearest land, to a place where a woman stood on the shore, a beautiful woman with black skin. She was weeping; like the man, she was lonely. She desired a husband and longed to bear children. So the turtle took the woman back across the sea to the island, and brought her as a wife for the man.

The man and the woman lived together on the island in happiness and peace. They laughed, they played in the sea, sometimes they quarreled, but they never lost the joy in their hearts. They made children together, beautiful black-skinned children, and those children had more children, and those children had more children. In this way the island became filled with people who grew crops and built houses and fished along the seashore.

And in time the island that the great sea-turtle had made became known as New Guinea.