Posted on April 23, 2017 by islandculturearchivalsupport

Here’s a story that I’ve been meaning to share, but haven’t had the chance to do so until now. The story was posted last month by the Vanuatu Daily Post regarding Vanuatu’s National Chief Nakamal (a traditional meeting place used for gatherings and drinking kava).

On March 7, 2017 Vanuatu celebrated National Chief’s Day which was a public holiday in Vanuatu, and communities around the country gathered together during the day with their chiefs. These celebrations usually reflect appreciation to chiefs for the work they do in communities for their people.

In Port Vila (the capital of Vanuatu) another major event took place on this day next to the Vanuatu Cultural Centre at the Malvatumauri National Council of Chiefs headquarters. The double celebration not only recognized chiefs, as well as it was a day to honor the re-opening of the National Chiefs Nakamal that was damaged two years ago when Cyclone Pam wreaked havoc in most of the islands in Vanuatu. 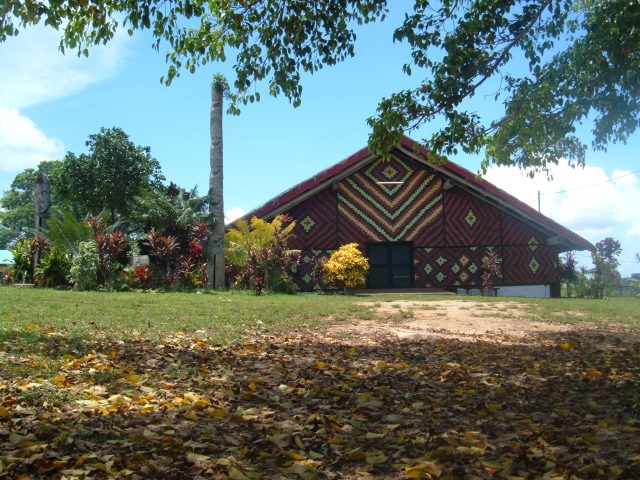 The Chiefs Nakamal has been built this time stronger and with new features. The first new feature to the Chiefs Nakamal is a new veranda that is attached to the main entrance complete with a lounge-like concrete floor and a concrete slope that connects with the flat surface at the door.

Chief Executive Officer of the Malvatumauri National Council of Chiefs, Chief Jean Pierre Tom explains that the current design has taken into account the need for people living with disability to be able to enter the nakamal on a wheelchair.

Also in times of a traditional state funeral, a vehicle carrying the casket can drive up the slope for the President of the Malvatumuari to receive it on the flat concrete floor.

Another totally new feature is a long veranda on the northern side of the nakamal, with a cleverly designed Malvatumauri Chamber at the Eastern end of the building. The Chamber is restricted to the members of the Council for their meetings.There is a Custom Protocol Officer’s Desk and a Catering Space inside the entrance to the building. You have to be inside to believe it.