Posted on April 21, 2017 by islandculturearchivalsupport

I don’t often have news from New Caledonia, but a couple of stories recently broke out that I believe are appropriate for sharing on this blog… 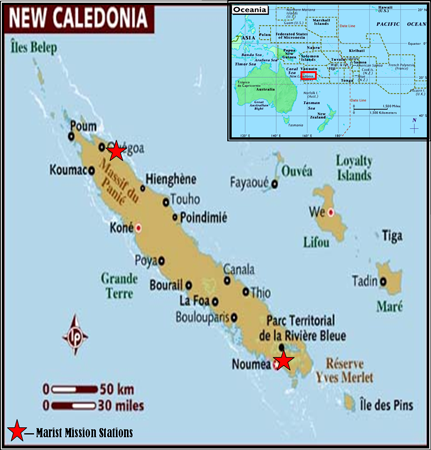 Where is New Caledonia?

Radio New Zealand  reported that a teacher, Germaine Nemia Bishop, in New Caledonia has announced that she will stand in the election of the French National Assembly in June to push for better recognition of the rights of the indigenous Kanaks.

Mrs. Bishop said her main point was to secure the application of the UN declaration on indigenous people’s rights which would boost the role of traditional chiefs in the running of the territory. Bishop, who has the backing of pro-independence teachers, said she was also driven by the independence referendum due next year which will conclude the 20-year decolonization process set out under the Noumea Accord.

Kanaks, who make up about 40 percent of New Caledonia’s population, are only one of two peoples officially recognized within the French republic. Under the Accord, chiefs were recognized but lack formal powers in administering the territory. Mrs. Bishop said 90 percent of prison inmates were Kanaks, there were practically no Kanak lawyers, doctors or engineers and the drop-out rate was high.

It showcases work from 11 Pacific artists and commemorates the regional Protect Pacific Whales – Ocean Voyagers Campaign. The threatened and migratory species adviser at the South Pacific Regional Environmental Program Mike Donoghue said the beautiful artworks highlight the important work that needs to be done to protect whales in the Pacific.

Donoghue hopes that the exhibition will inspire governments in the region to get on the same page when it comes to issues affecting whales. He said the whaling hey days are now in the past but the biggest threat to the survival of whales is through human activities. “And underlying all of that is protect the oceans to protect our whales. So the fishing industry has a responsibility here not to dump their tangled up lines and nets in the ocean. The maritime industry has a responsibility not to dump trash in the oceans. And all of us who are doing anything to do with tourism and coastal developments need to minimize the impact on the oceans.”

The Centre Culturel Tjibaou, dedicated to Jean-Marie Tjibaou who died in 1989 while leading the fight for his country’s autonomy from the French government, is devoted to the cultural origins and search for identity of the native Kanak people of New Caledonia and the South Pacific.

A Little about New Caledonia

New Caledonia is an overseas territory of France. British explorer James Cook named the territory’s main island “New Caledonia” because the island’s purple hills reminded him of the the Scottish Highlands.

New Caledonia’s capital, Nouméa, is the seat of the Secretariat of the Pacific Community, formed by Australia, France, the Netherlands, New Zealand, the United Kingdom, and the United States in 1947 to promote economic and social stability in the countries of the South Pacific.

The unresolved issues of independence from France and resurgent Kanak nationalism have underpinned the affairs of the territory since 1985, causing protest and bloodshed.