Posted on October 29, 2015 by islandculturearchivalsupport

I often mention in these blog how important language is to a culture. If the language is loss, the culture will soon follow. Radio New Zealand reports that in New Zealand the Tokelauan language was celebrated during this past week. It prompted one community leader to express that the week of celebrations may be key to the language’s survival.

The Reverend Tui Sopoaga says that the initiative has united the Tokelauan community. He believes that there is a real effort to spread the language among the youth now after the 2013 census showed that only 18 percent of Tokelauans in New Zealand spoke it, with only Niuean and Cook Island Maori spoken by less people within Pasifika communities.

Sopoaga states, “Our language is one of these three languages that are sort of dying out. This is the fourth year that we have had this language week. To tell you the truth it is very helpful, especially to the children, they are able to speak Tokelauan now. It is nice. It is beautiful.”

To hear an audio clip regarding this topic simply click here.

I don’t often talk about the country of Tokelau on this blog, and would be remiss if I didn’t share some facts about the tiny island country.

Tokelau consists of three main islands; Fakaofo, Nukunonu, and Atafu. Stretching over 93 miles halfway between New Zealand and Hawaii. The name ‘Tokelau’ refers to the north wind, which according to oral history, carried the first settlers to Polynesia.

Christianity is of most importance to Tokelauans. Catholic and Protestant missionaries from Samoa sailed to the islands in the mid-1800’s. Today, everyone looks forward to attending church services several times a week. While inhabitants of Nukunonu are nearly all Roman Catholic, most people who live on Atafu are members of the Christian Congregational Church of Samoa. Fakaofo has churches of both faiths. Regardless of denomination, music and dance figure prominently in religious expression and permeates daily life. In fact, the Roman Catholic Church on Nukunonu used Tokelauan music and dance as a vehicle for religious conversion. Christians introduced hymns and multipart harmonies. Adapted over time today they are a part of the fabric of Tokelauan identity.

Naturally, fishing governs the rhythm of life on Tokelau. Traditional fishing requires close observation of the phases of the moon, the stars, cloud formations and the progression of lunar months. Fish is the most important food and in addition to being cooked can be eaten raw or dried.

That’s Tokelau in a nut shell. It is a very isolated country. In fact, it is probably one of the most remote places in the Pacific Island region. There is no airport, and all passengers and cargo must travel by sea from Apia, Samoa which is about 500km from the southernmost atoll of Fakaofo. 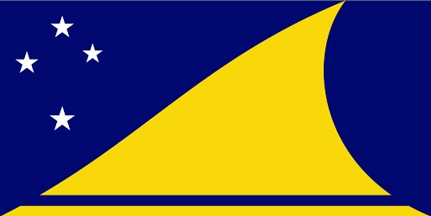 The national flag of Tokelau